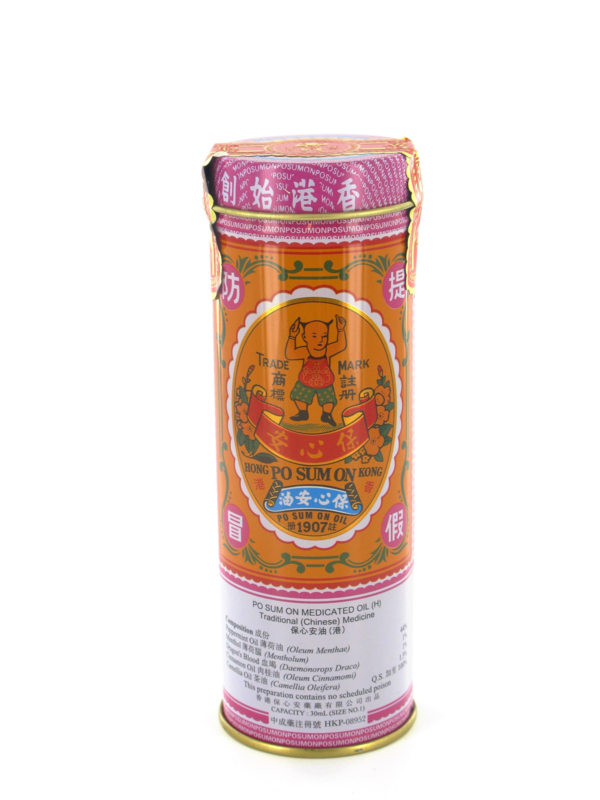 The name of this product sounds like a mispronounciation of "pour some on," which seems appropriate enough and is easy to remember it by. But, this is the Cantonese for what is called in mandarin Bao Xin Anor "Protect the Heart's Peace" oil. It is a famous product of Hong Kong, produced at the Po Sum On Medicine Factory, that relies on more than 50 employees to supply world demand. The company was established in 1907 specifically to produce this oil. Po Sum On won the British Empire Exhibition Certificate in 1924, and was distributed in mainland China, Taiwan, and Macao by the 1930s. It has been one of the leading topical oils from the Chinese tradition, with many imitations.

Po Sum On is made by steam distillation of the herbs, and contains no synthetic ingredients. The oil is comprised of the following ingredients per 100 ml (standard bottle is one ounce, about 30 ml):
Peppermint oil 57.30 ml,Tea oil 38.77 ml, Dragon blood 2.07ml,Cinnamon oil 0.96 ml,Scute 0.58 ml,Licorice 0.32 ml

Po Sum On is an example of a warming liniment for the circulation, yet it has an anti-inflammatory effect for the skin. It is considerably thicker and darker in hue than the thin, clear white flower oil that is also quite popular. Po Sum On is used to treat joint and muscle aches, used for osteoarthritis, neuralgia, and traumatic injuries (sprains).

The main ingredient, peppermint oil, is a well-known antispasmodic and analgesic. It has been used to alleviate headache, back pain, and post-herpetic neuralgia when applied topically, and it is also used internally to alleviate intestinal spasms. The essential oil from peppermint makes up only 1% of the dried leaf, so it takes 100 grams of peppermint to yield just 1 ml of the oil. The main active component of the oil is menthol, which comprised up to 30% of the total essential oils from the plant. Most topical analgesic products that rely on herbs contain menthol, but their content of this component is usually not more than about 2%, while Po Sum On oil contains nearly 15%, making it quite potent. Topically applied menthol at first causes a cooling sensation, but that is followed by a warming sensation as the blood flow increases.

Tea oil comes mainly from the seeds of the tea plant; it has a light color and fragrance and a consistency like olive oil that gives this formulation its rich quality. Dragon's blood is the resin fromDaemonorops draco, commonly used to promote blood circulation and tissue regeneration while relieving pain. Cinnamon oil is a warming stimulant to circulation and analgesic. Scute and licorice alleviate skin inflammation. 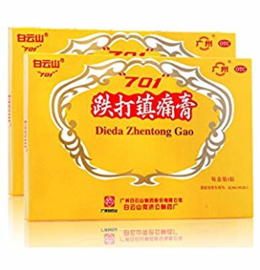